DINING REVIEW | NEW JERSEY
Close to Nature, and Perfection
A Review of Agricola Restaurant, in Princeton

Never mind that a restaurant named Agricola, the Latin word for farmer, has a distinctly manufactured feel. (A design firm and a branding firm were hired to create the rustic American effect.) The restaurant is a beautiful place in which to dine, and many of the dishes are, or are on their way to becoming, excellent.

The Princeton professor who accompanied me during one of my visits said that the space was unrecognizable as the former home of Lahiere’s, the venerable Princeton dining establishment that closed in 2010 after 91 years. Lahiere’s was said to have charm; Agricola, which opened in May, has the kind of elegant simplicity that only nature — or money — can provide. The details, which range from glistening white tiles and stainless steel in the kitchen to a framed page of the 1897 United States Department of Agriculture Yearbook in one of the six dining areas, are perfect. Even before I was served my glass of an excellent, dry Sancerre ($14 for a rather meager portion), I was happy.

If not perfect, many of the dishes are close enough. The menu describes its market salad as “whatever our farmer brings.” One night it included pickled mushrooms, cauliflower, pumpkin seeds and radishes, but its highlight was the tender, delicate kale. In season, most of it arrives fresh from the 112-acre farm owned by Jim Nawn, the owner of Agricola, who formerly was a developer of Panera Bread franchises in New Jersey.

The dressing on the salad was so lightly and evenly applied that you could hardly feel its presence, but you could taste it; a vinaigrette made of pumpkin seed oil, cilantro and a drop of lime, it gave the salad a gentle kick. In describing it to me, Josh Thomsen, the executive chef and Mr. Nawn’s partner, credited it to Manlee Siu, his chef de cuisine.

The equally notable goat cheese and potato terrine was Mr. Thomsen’s creation; instead of merely slicing the mix of goat cheese and sheets of lightly baked potatoes and serving it cold, he quickly sautées each slice to caramelize it. The result is a warm, creamy, oozing sliver of pleasure. Dipped in the sweet balsamic syrup that surrounds it, the terrine is further evidence of the skill that has won Mr. Thomsen accolades as a chef. 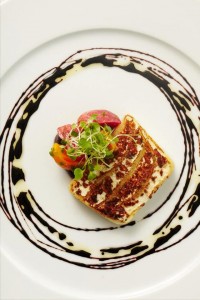 Before working at Agricola, Mr. Thomsen, 42, cooked under Thomas Keller at the French Laundry in Yountville, Calif., and Michael Mina in Las Vegas, but it was in New Jersey that he developed his love of cooking. Raised in Woodcliff Lake, he was inspired by his father, who was a bond trader and “a foodie before there were foodies,” Mr. Thomsen said on the phone after my visits.

Other stars on the menu include a salad of caramelized walnuts and delicate upland cress, which is as light as watercress but of a different genus and has a stronger, more peppery flavor. A cheese board of three excellent selections from Valley Shepherd Creamery in Long Valley included Crema de Blue, a cheese so rich and full-bodied that it might spoil you for the more delicate flavors to follow.

Among those more subtle flavors are the ones in the strozzapreti pasta, with a mix of spring onions, English peas, oven-dried tomatoes and wild arugula, all floating in a thin vegetable broth beneath a cloud of Parmigiano-Reggiano cheese. This gentle dish embodies the simplicity that characterizes the best of Agricola’s entrees; others are the large and perfectly braised beef short rib, distinguished by the tender texture of the beef, and a lusty pork chop, served juicy and exactly as ordered, medium rare, and accompanied by delicious and slippery pearl onions.

Because of the quality of ingredients and the care with which they were prepared, the dishes that did not deliver were worthy even if somewhat disappointing. Among these were a chewy and boring mushroom stew, and a plate of roast chicken that came with too many fingerling potatoes and not enough of the sautéed greens and green olive-fennel tapenade promised on the menu. The friend who ordered the Cape May sea scallops did exactly what I would have done had it been my entree: she pushed aside the caper and golden raisin relish on top — it was both too sweet and too salty — and enjoyed the scallops.

Many of the desserts are first rate, including a roasted black-plum cake made with teff flour, the work of Sarah Hecksteden, the talented pastry chef. Her Meyer lemon cheesecake is tart and creamy, and the house made ice creams are ultrarich. The caramel is exceptional.

I hope to eat more meals at Agricola, because it is a beautiful place to bring friends, and because its offerings are exactly what many diners prefer: simple dishes skillfully rendered. When all of its offerings are as good as its best ones, then Agricola will be first rate.
Agricola

THE SPACE Beautifully renovated space with seating in six dining areas for 163, including 16 at the bar and 22 at bar-height tables. Dining areas and restrooms on the main floor are wheelchair accessible. In fair weather, there is seating for an additional 14 outdoors.

THE CROWD Small and large groups, casually but well dressed and mostly middle-aged.