Corn is in and with the hot weather, there’s no better way to cook corn than to grill it. Friends have asked me what’s the best way to do it? There are two basic ways, depending on what you’re after. Corn today is so sweet and tender, it only needs to be heated through, so your decision is really up to you.   The two methods I like, are direct heat, which will brown the corn giving it a grilled flavor, or low temperature, steamed within its wet husk. 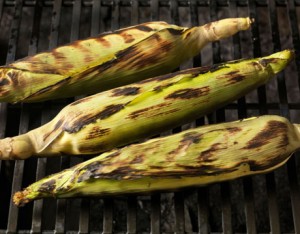 I like both and the corn to the right, which we ate during a recent family dinner. I love the appearance because it tells you how it was cooked.  If I wanted the smokey steamy effect, which gives you a cleaner corn flavor, pull the husk back, remove as much silk as possible by rubbing it with a kitchen towel, then fold the husk back up and soak the corn in cold water for 10 minutes.  Then grill over direct heat until heated through, ten minutes, with a nice hot flame. 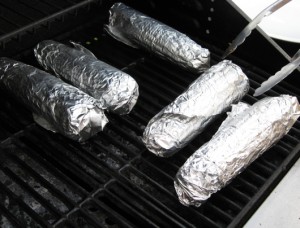 Another way I love to cook corn is without it’s husk. This can give a more caramelized flavor, because the corn will be in closer contact to the heat.
Peel off, remove and discard the outer husks. Using a damp paper towel or vegetable scrubber, remove the corn silks that cover the ear. Rinse each ear in water to remove any remaining silk or debris.

Place each cob on a square piece of foil large enough to wrap and cover the ear. Either spoon or brush on the unsalted butter, generously coating each ear. Sprinkle with salt and pepper to taste. Tightly wrap with foil, twisting the ends to seal it.

Either way you prepare the corn, place them on the grill and rotate every 3-4 minutes for 13-15 minutes total. If you listen carefully, the ears will start to sizzle towards the end. If you aren’t sure whether they are done or not, partially peel one ear. Some of the kernels should be browned and caramelized. 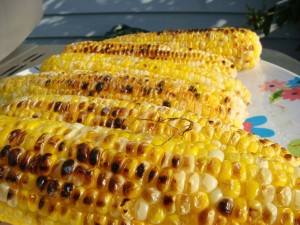